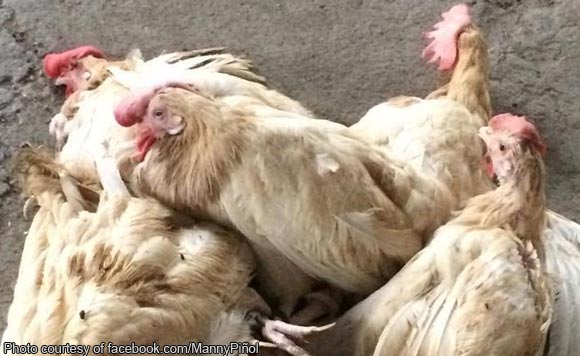 The Bureau of Animal Industry on Monday (August 14) said more than 18,000 birds hit by the bird flu outbreak have been culled in San Luis, Pampanga.

The culling operations started a day after the Department of Agriculture (DA) announced the outbreak.

Agriculture Secretary Emmanuel Piñol earlier said around 200,000 birds have to be culled within the quarantine zone’s one-kilometer radius.

But he added that birds will not be culled within the seven-kilometer surveillance zone.

The DA earlier banned the movement of birds, eggs, or other poultry products from Pampanga to other parts of the country because of the bird flu outbreak in the province.

Politiko would love to hear your views on this...
Spread the love
Tags: bird flu outbreak, Bureau of Animal Industry, Department of Agriculture (DA), ducks, ibon, manok na tinali, Pampanga, pigeons, quails, San Luis
Disclaimer:
The comments posted on this site do not necessarily represent or reflect the views of management and owner of POLITICS.com.ph. We reserve the right to exclude comments that we deem to be inconsistent with our editorial standards.