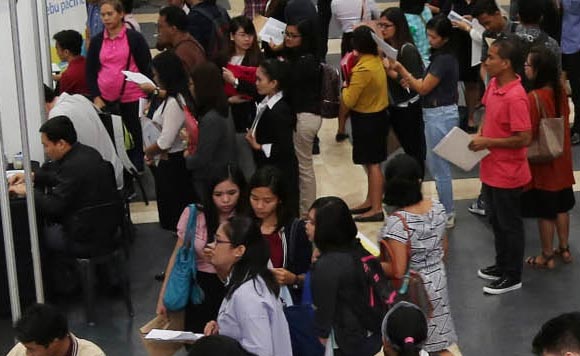 At least 17,000 job opportunities will be up for grabs at a job caravan that will be held at the Subic Gymnasium on February 9.

This was revealed by Build, Build, Build (BBB) committee chairperson Anna Mae Lamentillo in a media briefing in Malacanang Wednesday.

“The BBB jobs caravan is the government’s immediate response to the affected workers of the Hanjin Heavy Industries and Construction Corporation Philippines,” said Lamentillo.

A total of 75 contractors will hire for vacancies at the job caravan.

“As a situationer po, ‘yung Department of Labor and Employment, sinabi po nila na kung dati po 17,307 ‘yung employed workers noong March 2018, it has decreased ngayon po by 3,745,” according to her.

She added that the event is open to the public.

Politiko would love to hear your views on this...
Spread the love
Tags: Anna Mae Lamentillo, Build, Department of Labor and Employment, Hanjin Heavy Industries and Construction Corporation Philippines, Malacanang, Subic Gymnasium
Disclaimer:
The comments posted on this site do not necessarily represent or reflect the views of management and owner of POLITICS.com.ph. We reserve the right to exclude comments that we deem to be inconsistent with our editorial standards.