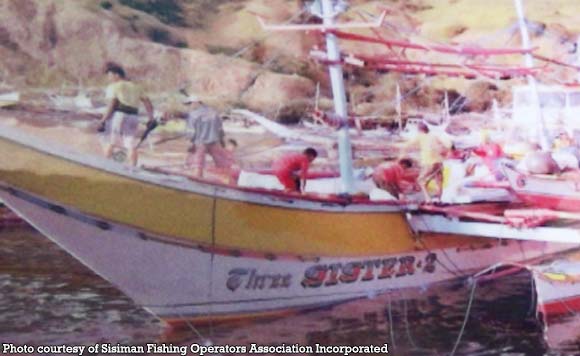 MARIVELES, Bataan — Mayor Jocelyn Castañeda of this town on Tuesday appealed to the government and other agencies to help in the search and rescue operations of 13 fishermen still missing after rough seas sank their fishing boat at the Reed Bank in Palawan on November 6.

Castañeda said of the 14 crew members of “three Sisters-2 boat”, only one was saved by a passing fishing boat.

“Nananawagan kami sa national na pamahalaan at maging sa probinsya na baka pwedeng tulungan sila sa search and rescue operations. Baka may pag-asa na buhay pa sila, baka nasa baybayin lang sila (We are calling on the national government and also to the provincial government to help in the search and rescue operation. They could still be alive and they might be along the shores only),” the mayor said.

“Humihiling kami sa lahat ng pwedeng ahensya na tulungan kami na makapag-provide ng helicopter para mas madaling makita sila at maisalba ang buhay nila (We are appealing to all agencies to help us in providing helicopter so that it would be for them to be located and save them if ever),” Castañeda added.

Marichel Barraca, secretary of the Sisiman Fishing Operators Association Incorporated, said based on the lone survivor, tragedy struck at 3 a.m. of November 6, 2019.

She said other fishing boats apparently sought shelter due to very strong waves and were unaffected.

Barraca said they were always informed of the weather condition through the radio and that there would be bad weather tomorrow, Wednesday.

“Bukas, Miyerkules, may lakas na naman daw. Kung ire-rescue sila gawin na dapat ngayon para may makita pang survivor. Sinabi ng mga mangingisda na kung may buhay pa, nanghihina na ngayon kaya kailangan na talaga dapat ngayon na sila makita. May helicopter sana para madaling makita sila. (Tomorrow, Wednesday, the waves are said to be strong again. If they are going to hold a rescue, it should be done today for possible survivors. According to other fishermen, if they are still alive, the missing fishermen are already weak, thus they must be found now. I hope there will be a helicopter so that they can see them immediately),” she said.

“Bangka naiwan na doon, nahati, pira-piraso na (The banca was left behind there and have been torn into pieces),” Barraca said.

Leonisa delos Santos said she last saw her husband, boat captain and owner of the fishing boat, on October 28, 2019 when the group left to fish at the Reed Bank and heard of the tragedy on November 7.

“Malakas ang loob ko na buhay pa sila. Dati nagpapaalam ang asawa ko bago umalis pero noong umalis hindi nagpaalam. Laging mainit ang dugo na makapalaot dahil isang linggong hindi nakapalaot, nasira ang makina ng bangka namin (I have a strong feeling that they are still alive. Before, my husband said goodbye before leaving but not this time. He was eager to go fishing because for a week he was unable to do so as the engine of our boat malfunctioned)” the wife said.

She said her husband has been fishing since 1985.

Rosita Epetito said her son Angelito Jr. survived but another son, Ronilo, is among those who are still missing.

Politiko would love to hear your views on this...
Post Views: 1
Spread the love
Tags: Mariveles, Mayor Jocelyn Castañeda, Reed Bank sea
Disclaimer:
The comments posted on this site do not necessarily represent or reflect the views of management and owner of POLITICS.com.ph. We reserve the right to exclude comments that we deem to be inconsistent with our editorial standards.