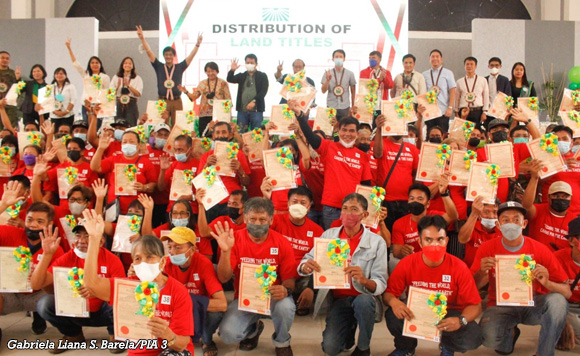 Some 124 agrarian-reform beneficiaries (ARBs) from the province of Tarlac have received their Certificate of Land Ownership Award (CLOA) from the Department of Agrarian Reform.

According to a Philippine Information Agency report, DAR Secretary Conrado Estrella III led the distribution of 49.227 hectares of agricultural lands in seven municipalities and one city.

The beneficiaries included 37 farmers from Concepcion, 36 from Mayantoc, 19 from Capas, 16 from Paniqui, seven from San Jose, four from Victoria, three from Pura, and one each from Anao and Tarlac City, the report said.

“We need to give our farmers another opportunity to increase their earnings for
them to support the needs of their families,” Estrella said.

He noted that there were courses and scholarships offered by the Technical Education and Skills Development Authority and other institutions to upgrade their farming skills.

Estrella reminded the farmer-beneficiaries not to sell or pawn of, but cherish the lands that they received from the government.

Politiko would love to hear your views on this...
Spread the love
Tags: agrarian-reform beneficiaries (ARBs), Certificate of Land Ownership Award (CLOA), Department of Agrarian Reform
Disclaimer:
The comments posted on this site do not necessarily represent or reflect the views of management and owner of POLITICS.com.ph. We reserve the right to exclude comments that we deem to be inconsistent with our editorial standards.