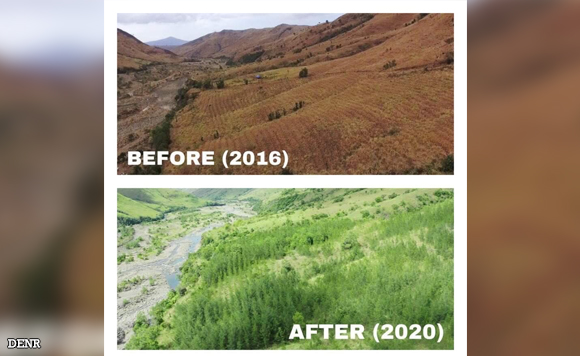 The Department of Environment and Natural Resources (DENR) has rehabilitated some 122,000 hectares of denuded forestlands and watersheds in Central Luzon since 2011, officials said.

The rehabilitation was done through the government’s National Greening Program.

DENR Regional Executive Director Paquito Moreno Jr. said the government’s flagship reforestation program has continued to restore the region’s degraded areas and has reinforced its efforts on increasing the survival rate of these plantation sites.

“In average, the survival rate of our plantation sites is around 81 percent. This rate is significantly affected by natural occurrences such as forest fire and extreme weather changes,” he said in a statement.

Moreno said partnerships with private firms were also strengthened to achieve a higher survival rate in these plantations.

To date, 62 unfunded NGP areas have already been adopted by different organizations.

Politiko would love to hear your views on this...
Spread the love
Tags: Central Luzon, Department of Environment and Natural Resources (DENR)
Disclaimer:
The comments posted on this site do not necessarily represent or reflect the views of management and owner of POLITICS.com.ph. We reserve the right to exclude comments that we deem to be inconsistent with our editorial standards.