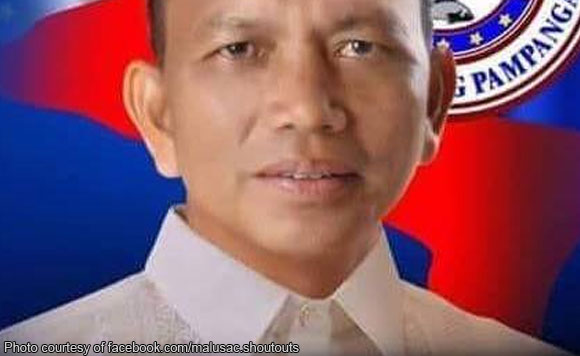 Salvador said the victim was jogging at about 6:30 a.m. when two men stabbed and shot him. Angeles was rushed to the nearest hospital but later died at around 10:41 a.m. He succumbed to eight stab and two gunshot wounds.

He said the suspects’ faces were covered as they were wearing ski masks.

Meanwhile, Vice Governor Dennis Pineda, chair of the political party Kambilan, condemned the attack as “uncalled for and inhumane.”

Angeles was reportedly set to run for vice mayor under the same political party, with Mayor Nardo Velasco as running-mate.

The vice governor offered a PHP500,000 reward to anyone who can provide valid information on the killers.

He urged the police to increase their visibility as the date of the filing of certificates of candidacy for the mid-term elections draws near starting October 11.

“Vice Governor Pineda is praying and hoping that the campaign and election period would not be marred by violence. There should be no life or limbs lost because political contests should be fought fairly and squarely,” Provincial Board Member Rosve Henson said.

Henson said Kambilan candidates are expected to abide by party rules to resort only to peaceful means of campaigning. (PNA)

Politiko would love to hear your views on this...
Spread the love
Tags: Councilor Jesus “Boyet” Angeles, Pampanga Police Provincial Office, Senior Supt. Nicanor Salvador, Vice Governor Dennis Pineda
Disclaimer:
The comments posted on this site do not necessarily represent or reflect the views of management and owner of POLITICS.com.ph. We reserve the right to exclude comments that we deem to be inconsistent with our editorial standards.