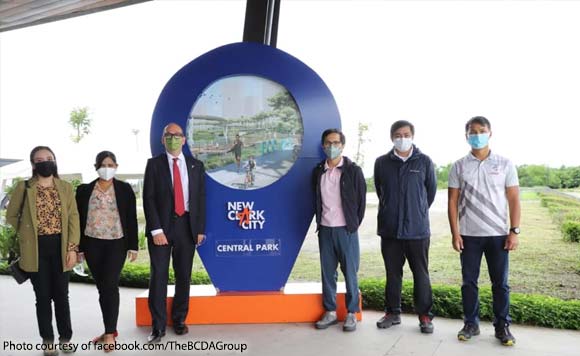 The New Clark City Central Park will soon rise on a sprawling 44.8-hectare open space in Tarlac province, according to the Bases Conversion and Development Authority (BCDA).

The park in New Clark City is set to become one of the largest public parks in the Philippines, inspired by the country’s heritage, the BCDA said in a news release.

On Friday, the BCDA and the British Embassy Manila unveiled a symbolic marker at the future site of the park during the ceremonial groundbreaking.

In September 2020, the BCDA signed a memorandum of understanding (MOU) with the British Embassy for the design of NCC Central Park, as well as an affordable housing project in the new metropolis.

“The New Clark City Central Park will be a great example of how we can use our land and water resources more sustainably to foster biodiversity, of how we can allocate green spaces to connect people with the environment and through that, to promote greater health and personal well-being,” UK Ambassador Daniel Pruce said.

BCDA president and CEO Vince Dizon said: “New Clark City is founded on the vision of becoming the first green, sustainable, and resilient city in the country, modelling from the successes of cities all over the world, especially those in the United Kingdom.”

“We are so fortunate that the Foreign, Commonwealth and Development Office decided to choose New Clark City as one of its models, to assist in this once-in-a-lifetime greenfield development,” he said.

Politiko would love to hear your views on this...
Spread the love
Tags: Bases Conversion and Development Authority, Central Park, New Clark City
Disclaimer:
The comments posted on this site do not necessarily represent or reflect the views of management and owner of POLITICS.com.ph. We reserve the right to exclude comments that we deem to be inconsistent with our editorial standards.