1.25 kilos of shabu seized from ‘drug trafficker’ in Pampanga 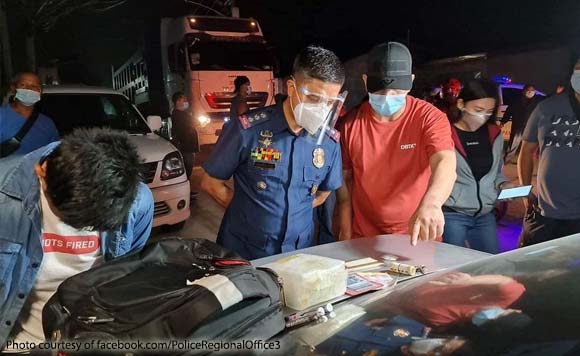 Authorities seized about 1.25 kilos of shabu or methamphetamine hyrochloride with an estimated street value of P7.1 million from a suspected illegal drug trafficker operating in Pampanga and nearby areas on Thursday.

The suspect did not resist arrest during the buy bust operation at Barangay Sta. Cruz, the report said.

Police said the suspect had been under surveillance by the Provincial Drug Enforcement Unit for illicit drug trading before he was arrested.

The report quoted Police Maj. Louie Gonzaga, chief of the PDEU, as saying that the suspect negotiated the sale of 1.5 kilograms of shabu.

Politiko would love to hear your views on this...
Post Views: 29
Spread the love
Tags: drug trafficker, methamphetamine hyrochloride, Pampanga, shabu
Disclaimer:
The comments posted on this site do not necessarily represent or reflect the views of management and owner of POLITICS.com.ph. We reserve the right to exclude comments that we deem to be inconsistent with our editorial standards.